It all started with a trip to Tuscany and Umbria, which definitely changed the course of life of Emmanuelle Dechelette, a Parisian who trained in Italy, becoming a professional taster Onaoo. Participating in the olive harvest, directly in the field is like living a wonderful moment. Your first experience in the oil mill, at the moment of extracting the olives? A stress like in the highlights of motherhood, like when you are expecting your first child

A Parisian, she earned her Olive Oil Sommelier diploma in New York in 2017 and published, in 2018, the volume Extra vierge for Dunod Editions.

Emmanuelle Dechelette was interviewed in issue 12 [cartcaea edition: HERE; digitally browsable edition: HERE] of OOF International Magazine, and it could not be otherwise, since the entire monographic issue is dedicated to the feminine side of oil.

Here, on the Olio Officina webmagazine, we interview her on other topics.

Read carefully. She is the creator of “Olio Nuovo Days”, an event that she has been organizing since 2016 in her native Paris, with the declared purpose of bringing together chefs and oil producers from all over the world.

Since 2017, she has been part of the oldest and most prestigious tasting school in the world, the Italian Onaoo, in Imperia; and, since January 2020, she has qualified as an Onaoo professional taster. 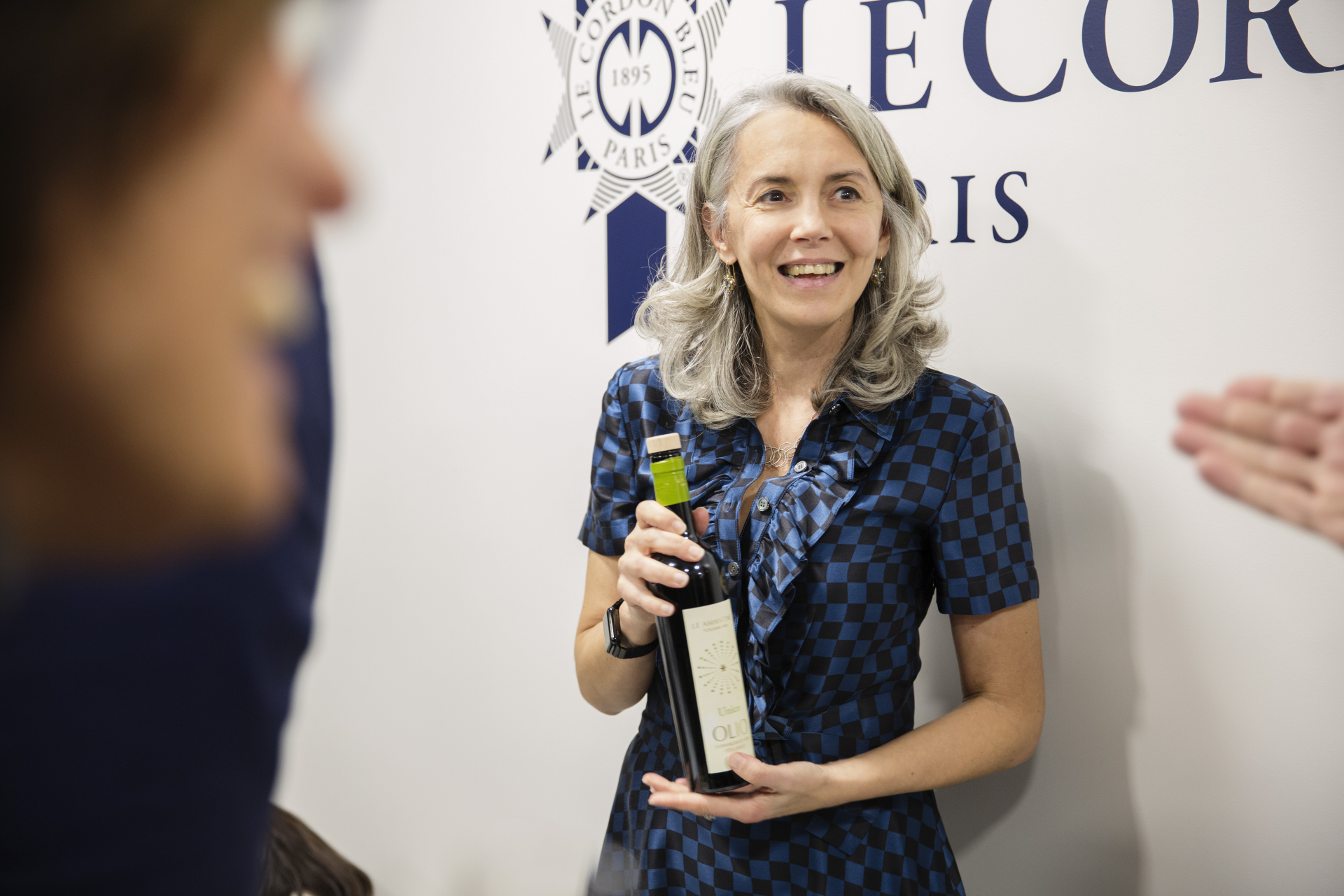 The first question that comes to mind is how come, born and living in Paris, you showed so much attention towards extra virgin olive oil? Here, what pushed you towards a food that in France, apart from the places of production, is almost unknown and little used?

It was a trip to Italy that was the turning point. A trip to Tuscany and Umbria that changed the course of my life. In the summer of 2014, I visited Fattoria di Bagnolo in Impruneta, where I loved the olive oil produced by Marco Bartolini Baldelli. He explained to me that if I enjoyed his oil in August, when in fact I tried it, then I would also love the new oil. He promised to send me some in November. Unfortunately, or fortunately, he did not keep his promise. I never received her new oil in Paris. I was intrigued, and I was running out of my oil supply, so I started investigating, but I couldn’t find the new, freshly pressed oil anywhere in Paris. This, in 2015. Then on the internet I discovered new oil festivals, in Italy as well as in California. I was unaware that in any producing country, new oil festivals were routinely held right in the place of production.

It was out of this sense of frustration that I came up with the idea of a festival similar to that of Beaujolais Nouveau, so as to celebrate the new oil in places other than those of production, in places with more gastronomic references, such as in Paris, in starred restaurants and pastry shops. This was the genesis of Olio Nuovo Days.

Your training took place first in New York, and then consolidated in Imperia, at the first tasting school in the world, Onaoo, where you obtained the qualification of professional taster. Well, what have you learned in all these years? What idea have you gained of the complex and varied expression of extra virgin olive oils?

I can say that mine is a continuous training. I gained an international network with my experience in New York, but in an incomparable way, it was in Imperia that I learned the nuances and subtleties of olive oils, and I also learned to respect the work of producers, their quest for perfection that is challenged every year. I had the opportunity for three years to work in the Greek island of Kythera, where a producer had asked me to follow his olive oil and for this very reason I had hired Kostas Liris, a Greek agronomist, professor of oleology and the art of oil milling. I must admit that you learn a lot in the field, especially when you have to obtain the best possible oil from what you have as raw material and from what you don’t have. I had the impression that I was working with Mc Gyver: I imagine it is like that for every year, for every harvest and for every producer; it is also a great lesson in humility.

In the field, participating in the olive harvest, the moment you experience is wonderful. My best gastronomic memory is my first time tasting olive oil fresh from the press on a big slice of bread. And my first experience, when it came to extracting the olives in the olive press, I was as stressed as a man in the moments of motherhood, expecting my first child. It was a very intense moment for me. 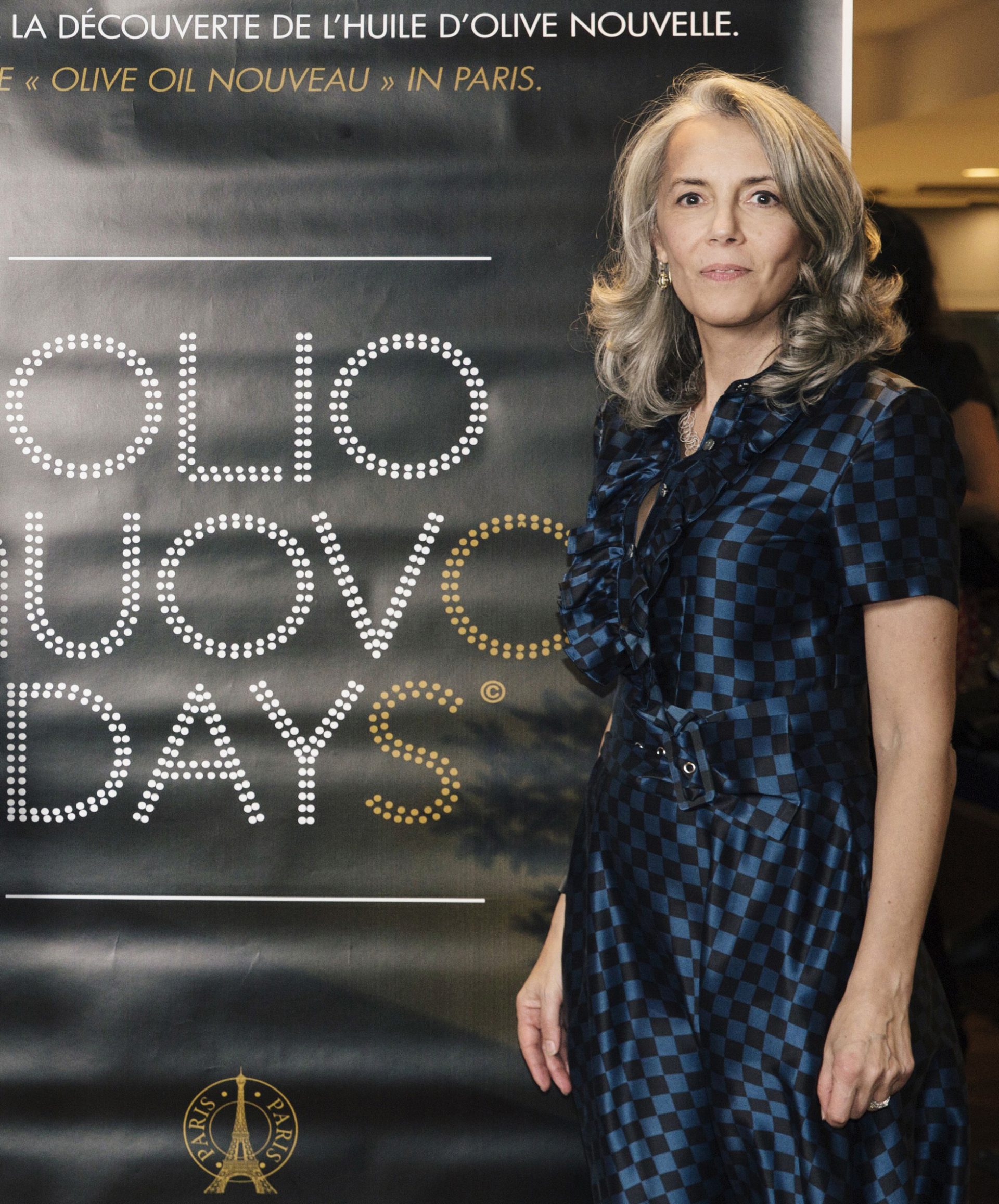 A question I don’t like being asked, I’m asking you instead, because it’s different. I was born and raised in the world of oils, my family has been producing since 1815, has olive groves and oil mills. You, on the other hand, come from a different world and you approached olive oils only afterwards, so I ask you: among all the oils you have tasted, which ones – from a personal and subjective point of view, not an objective one – do you prefer? What type of fruitiness do you usually consume? Which cultivars are those of your heart? Which territories do you love the most, for their oils…?

Your question is very interesting. I think that often, when we discover a product that is not part of our culture, it is for us a bit like the beginning of a love story. There is a shock of sensations, a desire to know more, to learn, to discover what we like and what we didn’t know yet… I often compare olive oil to a love story: it is the first oil we loved, the one we have always been looking for. I have been able to overcome this, through my professional activities, but my comfort zone is always and still with Italian olive oil: the almond flavor of the Frantoio cultivar is my absolute. Spanish Hojiblanca oil, or Tunisian Chetoui. And, recently, I discovered Slovenia’s Istrian White, Vanja’s, which is my latest passion. I think I’m looking for strong sensations. Then I discovered a good oil from Japanese Taggiasca olives, the one from Mr. Takao, and so I was converted to this delicacy, and I discovered that it could also be excellent in Italy! Still the taste of almond, probably reminds me of the smell of glue from my childhood. In France I like oils from the Verdale du Vaucluse and Picholine olives with full-bodied flavors, but also Courbeil d´Occitane oil. I don´t like the old fashioned taste at all. I was trained in Italy, and what I look for in olive oil is that feeling that makes me taste a dose of nature.

You’ve also published a book, Extra Vierge. How do you outline it?

My book Extra Virgin has strengthened in me the knowledge of the olive world, and it also represents my vision of olive oil, which is above all a story of women and men, of passion and universality. It is inspired by Olio Nuovo Days, and offers the reader a variety, a producer, and a chef’s recipe. There is, of course, Marina Gioacchini’s Frantoio, Le Amantine, which is one of my favorite olive oils. This book was published by Dunod, a large French publishing house, but unfortunately it has not been translated, which is why I am working on two other olive oil book projects, one of which has an international focus.